Lucky Lindsay Lohan has an excuse for everything — why she has drugs in her pants, why she wound up with a stolen necklace around her neck, why her house arrest ankle bracelet went off… Everything except why she can’t stay out of trouble. Gamblers know seven is a lucky number, and Lindsay is great at gambling with her future — so SheKnows presents Lindsay Lohan’s lucky seven excuses! 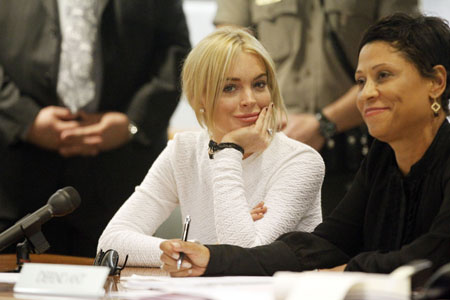 When Lindsay Lohan was busted after a wild chase on the Pacific Coast Highway in 2007, cops found cocaine in her pants pocket. Lindsay’s explanation? They weren’t her pants. “I am wearing a pair of borrowed jeans from a friend/assistant… She wore a pair of my jeans,” she wrote in her official statement to police. Paris Hilton tried a similar tactic when she told Las Vegas cops the purse in which they found cocaine wasn’t hers. It didn’t work for her, either.

6. My passport was stolen!

Lindsay Lohan made quite a splash at Cannes in 2010 — but she should have been at court in Los Angeles. Rather than hightail it home in time for her probation hearing, Lindsay stayed in France to party — er, to replace her missing passport. She told the court, “My passport’s been stolen.” They didn’t buy it, and neither do we.

The relationship between Lindsay Lohan and her father Michael Lohan has long been contentious at best, but as much of a choad as the guy is — and he is a total choad — Lindsay expects us to give him far more credit than he deserves where her bad behavior is concerned. The stolen passport situation? “It’s clearly an inside person who works with my father that has been sent to set me up. He’s been threatening me,” she said. Her drug and alcohol addictions? “When my father was going public, that’s when I hit rock bottom,” she said. It’s all Daddy’s fault.

4. I was just borrowing it.

Lindsay Lohan has a long history of having sticky fingers: In 2007 she was accused of swiping $10,000 worth of clothes from the home of former friend Lauren Hastings; in 2008 she stood accused of stealing a $12,000 mink coat from a nightclub; in 2009 she “forgot” to return a bunch of jewelry she had “borrowed” from Arielle de Pinto; later in 2009 $400,000 worth of jewels went missing from an Elle photo shoot in which Lindsay was featured; in 2010 Lindsay was spotted wearing the exact same $35,000 Rolex a friend had reported stolen; and in 2011 Lindsay was accused of stealing a gold-and-diamond necklace from a Venice, California jeweler. In some cases Lindsay denied all involvement in spite of being caught red-handed with the goods; in others she said she was just borrowing it and there must be some misunderstanding. Uh-huh.

This one is actually true, but a bad excuse nonetheless. Lindsay says that when she moved to LA at 18 years old, alone, there was no adult around to tell her to not do drugs and stop acting like a jerk. “I was 18, 19 — with a ton of money — and no one really here to tell me that I couldn’t do certain things,” Lindsay once said. In fact, mom Dina Lohan was warned about Lindsay’s behavior years ago and never stepped up her parent game to put a stop to it. But still, it is yet another example of Lindsay not taking accountability for her actions.

2. I didn’t know the drugs were there.

Almost as good as “These aren’t my pants,” “I didn’t know the drugs were there” is not all that believable when there is a photo of you standing next to several lines of cocaine. Lindsay Lohan was snapped mugging with a couple of people she later called fans, and clearly visible on a table next to Lohan are several lines of a white powder — and Linds herself is holding several rolled cigarettes. Her reaction? “That’s a setup, that’s so untrue.”

1. The anklet is defective.

Lindsay Lohan’s ankle monitoring device went off on Tuesday, signaling that she had broken the terms of her house arrest and left the premises. The story line? Faulty equipment. That may be so — the court and the company that makes the device seem to be accepting it — but it sounds strangely similar to Lindsay’s reasoning last year when her SCRAM device went off five times. “It’s from the light up bracelet Johnny put on me,” she tweeted. Yeah, the court didn’t buy it either and in the latter case revoked her bail and issued a bench warrant for her arrest. She got off lucky this time.