Demi Lovato is in recovery and doing what she loves most: Making music. 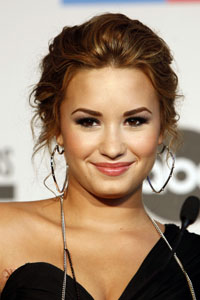 Demi Lovato is feeling pretty great these days, thankyouverymuch — and she says music is the best therapy a girl could ask for.

The singer/actress, who recently admitted to battling bipolar disorder amongst a host of other issues, says she is back in the studio making new music and can’t wait to share it with her fans. The 18-year-old told Seventeen magazine — where she is a contributing editor — all about it.

“I love being back in the studio! It’s been very therapeutic to be able to express my feelings and talk about who I really am, through my music,” she wrote. “It also helps that I’ve been lucky enough to work with such talented people on the record so far!”

“With my new album, I’m hoping to provide inspiration for girls everywhere who are going through the same issues I’ve faced,” she continued. “I think this will come through in a lot of the material. My first single is really special to me — to me it symbolizes my journey from the person I was to the happy healthy person I am today, and the fact that people are able to rise above anything, despite the odds. I’m so excited to share all of this with you guys! The experience has been amazing so far and I’m really enjoying the whole process. There are definitely a lot of emotions that go into making an album. I feel blessed, inspired, and nervous with anticipation, but mostly, I feel excited about the future, and about sharing this new record with my fans!”

Demi Lovato started cutting at the tender age of 11 and recently said that she was choosing music over returning to her hit Disney show Sonny with a Chance so she could focus on her self-image issues, which include an eating disorder.