Last night, So You Think You Can Dance took to New York and Salt Lake City and tapped eight dancers to compete in Las Vegas. Tonight it’s time to give the Los Angeles movers and shakers a chance to dance another day on SYTYCD and according to Mary Murphy, these auditions are going to rock your world! 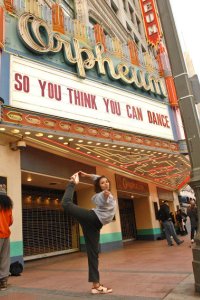 Cat Deeley, Mary Murphy and Nigel Lythgoe have traveled to Atlanta, San Fran, NYC and Salt Lake City to find the best of the best dancers and today, Thursday, it’s time to hit the Orpheum in downtown Los Angeles.

“LA’s always been good, but this year, it was off the charts,” Mary Murphy previewed in SheKnows’ exclusive video interview. “It was to the point that we’re working 15 hours and me and Nigel were giddy at the end of the day, because we’d been inundated with so much talent. Usually, you get one good day. We had two whole days of giving tickets left and right, left and right.”

Murphy also revealed last night’s guest judge Robin Antin from the Pussycat Dolls will be “heavily involved in the show.” It looks like she just might take a permanent seat on the panel this season.

The SYTYCD Los Angeles auditions air tonight, Thursday, June 2, from 8 to 9 p.m. on Fox. Then next week, it’s off to Vegas to choose the top 20!

The live shows may be a few weeks off, but hardcore SYTYCD fans who will be in the Los Angeles area should think ahead and keep your eye on the SYTYCD Audience Ticket Page.