Colin Farrell, Jennifer Aniston and Kevin Spacey take a demented turn as Horrible Bosses and Jamie Foxx steps in as a murder consultant, giving Jason Sudeikis, Jason Bateman and Charlie Day a platform for laughs. The newest trailer has landed, along with a sneak peek clip, and this comedy looks deliciously dark.

Kurt, Dale and Nick are pushed to the edge and team up to take out their bosses, but murder ain’t as easy as it looks. 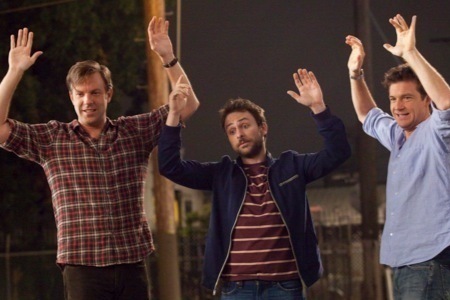 Jennifer Aniston is getting a lot of buzz for her demented, sexy turn in Horrible Bosses and Colin Farrell, Kevin Spacey and Jamie Foxx also give into their id to get in on the laughs. The Horrible Bosses are prone to little foibles like lying, manipulation, sexual harassment and prejudice, while Foxx is a con artist who offers to serve as the guys’ murder consultant.

The real stars of this dark comedy, however, are Saturday Night Live‘s Jason Sudeikis, It’s Always Sunny in Philadelphia‘s Charlie Day and Arrested Development alum Jason Bateman. The guys are out for murder, but ill-equipped.

Clearly, Horrible Bosses is not a pick for family movie night. “It’s nice to do a comedy that has a bunch of stuff that makes you laugh,” Bateman said of the R-rated laughs in an interview with MTV. “It’s not just language or nudity: It’s also sometimes just tonal. You can be a bit meaner to babies. The comedy’s just a little spicier. With a PG, you can be mean to baby, but then you have to coo [to] it.”

There’s no baby torture in Horrible Bosses, but you get the point. “There’s no redeeming message, whatsoever,” promises director Seth Gordon (Freakonomics, The Office, Community). “It’s just for laughing, and laughing hard.”

Horrible Bosses hits theaters July 8. In the meantime, check out the trailer and weigh in: Does Horrible Bosses look like it will get you “laughing hard?”