What does being a young rock star creating art have to do with being a parent? Rihanna, whose Man Down video has been condemned by the Parents Television Council, would sure as heck like to know! 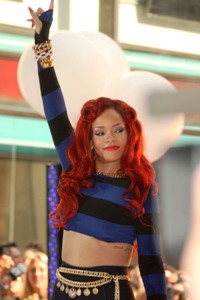 The lack of love between Rihanna and the Parents Television Council goes both ways. The group, which spoke out to condemn Rihanna’s Man Down music video Wednesday, now has a few questions to answer straight from the singer herself.

Rihanna took to her Twitter Thursday to address the Man Down video controversy with a solid question. “I’m a 23 year old rockstar with NO KIDS!” she writes. “What’s up with everybody wantin me to be a parent? I’m just a girl, I can only be your/our voice!”

Rihanna, who plays a sexual assault victim who gets revenge on her attacker by shooting him in the head in the Man Down video, continued, “We have the freedom to make art, LET US! Its your job to make sure they dont turn out like US.”

Despite the assertion that she’s not ready or willing to act as anyone’s parent, Rihanna parted her Twitter rant with this bit of advice. “U can’t hide your kids from society, or they’ll never learn how to adapt! This is the REAL WORLD.”

The Parents Television Council (PTC) had said, “Rihanna’s personal story and status as a celebrity superstar provided a golden opportunity for the singer to send an important message to female victims of rape and domestic violence. Instead of telling victims they should seek help, Rihanna released a music video that gives retaliation in the form of premeditated murder the imprimatur of acceptability. The message of the disturbing video could not be more off base.”

The only question remaining is whose side are you on in the Rihanna Man Down controversy? Team Rihanna or Team PTC?