Hail to the new chief — President Donald Sutherland! The veteran actor has been cast as the president in Gary Ross’ The Hunger Games. He joins the growing roster that currently includes Oscar nominee Jennifer Lawrence, Woody Harrelson, Elizabeth Banks and Lenny Kravitz. 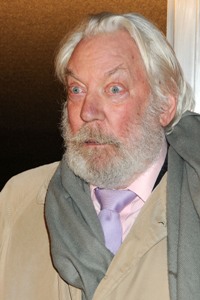 In The Hunger Games, Donald Sutherland will play President Coriolanus Snow. He’s a real snake in the grass who rules the fictional country of Panem and its multiple districts. Snow has been in power for 25 years and isn’t above using brute force or intimidation tactics to get his way.

The premise of The Hunger Games pits teens (some younger than others) from various districts against each other in a fight to the death. Jennifer Lawrence plays the protagonist Katniss Everdeen, a gifted fighter whose weapon of choice is a bow and arrow. Watching her go toe to toe with Donald Sutherland should be an interesting sight.

Production began on The Hunger Games in May so Sutherland is joining the party a little later than everyone else. Some of the other members of the cast include Stanley Tucci, Josh Hutcherson and Liam Hemsworth.

The Hunger Games is scheduled to hit theaters on March 23, 2012. Are you pumped?