X-Men: First Class is a true ensemble film and according to the film’s stars, Rose Byrne, Zoe Kravitz and Lucas Till, that is what sets this superhero franchise apart from the rest of the pack. 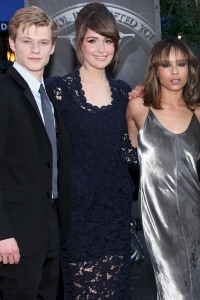 X-Men: First Class sends the franchise back to the beginning and as the film begins in 1962, audiences find Rose Byrne’s CIA agent heading into a Vegas casino in search of answers. Byrne was teased by her co-stars Zoe Kravitz and Lucas Till in our exclusive video interview for being the only one of the three in the room who lacks mutant powers.

The joyous, borderline goofy feeling in the room was palpable as it was clear the three actors could not be more thrilled to be part of the world of X-Men and, overall, simply enjoyed each other’s company. Judging from Byrne, Kravitz and Till’s enthusiasm, the trio would not have to have their arms twisted to return for a sequel to X-Men: First Class.

When asked what power each would want, Kravitz scored points with Byrne and Till because her mutant power is flying. Her Angel Salvadore/Wings character was the envy of the room.

Yet, if you asked us, Till’s character’s (Alex Summers/Havok) ability to channel powerful energy into a fierce weapon is pretty stellar too!