The fertility doctor responsible for Octomom’s huge brood has had his medical license revoked! 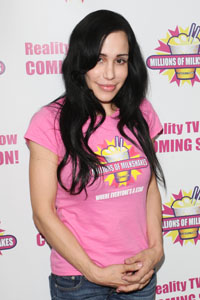 Octomom is going to have to find a new doctor. The physician who is responsible for Nadya Suleman’s giant family has had his medical license revokedby the state of California.

The Medical Board of California ruled that Dr. Michael Kamrava “did not exercise sound judgment” when he implanted 12 embryos into Suleman, resulting in eight live births. Octomom already had six kids, bringing her grand total to 14.

The attorney general’s office accused Kamrava of being grossly negligent in his treatment of Octomom and two other patients: A 48-year-old who experienced major complications after becoming pregnant with quadruplets and a 42-year-old who developed ovarian cancer after going through Kamrava’s recommended course of treatment.

The doctor’s license will be revoked effective July 1, 2011. In a statement, the medical board said, “The board is not assured that oversight through probation is enough, and having weighed the above, has determined that revocation of respondent’s certificate is necessary to protect the public.”