Actress Molly Sims is engaged to film producer Scott Stuber — and she couldn’t be happier. 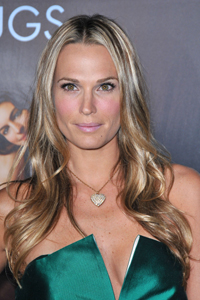 Las Vegas actress Molly Sims, 38, is ready to walk down the aisle with Love and Other Drugs film producer Scott Stuber.

“I’m beyond thrilled to be engaged to Scott! I’m so happy and over the moon!” the former Sports Illustrated model gushed on Twitter.

Stuber, who also produced movies such as You, Me and Dupree and Role Models, popped the question around May 20th. The couple has been dating for over a year.

Before dating Stuber, Sims was dating actor Aaron Eckhart before the two split in 2009. Eckhart reportedly “flipped out” and broke it off with her because he was upset that she admitted to the press that the two were dating.

“Molly was surprised that he ended it with her — and by phone — but she was starting to realize he’s not right for her. He’s so closed off from the world,” an insider revealed. “She wants someone a bit more chill. Besides, she feels she deserves a guy who isn’t afraid to tell the world they’re in love!”

It sounds like she has found the right guy with Stuber! No word yet on the wedding date.