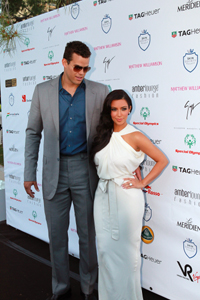 “I got the ring a while ago. I had it for a few weeks,” he said. He reportedly kept it hidden while he was picking biblical passages to engrave on the band.

“It’s engraved, with two things from the Bible,” he told People. “There’s one verse, Proverbs 31: 10-31, about the perfect godly woman. The other, 1 John 3:18, is about love. It took me a few days to pick them out and research the perfect ones.”

It sounds like Kris put a lot of thought into the ring, as he also has “K [hearts] K engraved between the two Bible verses.

Humphries revealed that Kim’s good friend and publicist, Jonathan Cheban, also helped him with the ring.

“I know all her girlfriends but he’s her only guy friend. I wanted to ask him what he thought. A while ago, I called him and told him, ‘I have to do this, I have to propose, I want to do this now!'” he said.

Humphries, 26, proposed to Kardashian before their trip to Monaco. “I wanted to propose before the trip so we could really spend some quality time together with my family as a couple,” he said.