Vicious fans of Justin Bieber are sending new death threats to his girlfriend Selena Gomez after news broke the two are getting serious. 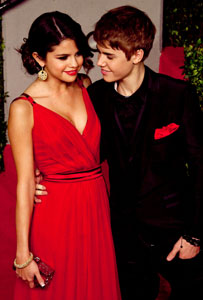 Jealous Justin Bieber fans are outraged that he and girlfriend Selena Gomez are taking their relationship to the next level. After photos surfaced of the couple frolicking on a beach together in Hawaii and news broke that they met each other’s parents — hot on the heels of a very public kiss at the Billboard Awards — Selena Gomez is facing renewed death threats.

“Stay away from Justin paedophile… I’m gonna kill ya in the night underneath your smell bed.”

“I will kill selena and dispose her body.”

Gomez, 18, was recently spotted at a park in Canada with Bieber, his father and his two half-siblings.

Newsflash, Einsteins: Selena Gomez or no Selena Gomez, chances are pretty much zilch that you will ever meet, let alone date, Justin Bieber. You can trust me on this, as I am a woman who, despite several years of insistence it would happen, has not borne the child of Jordan Knight.