Jennifer Aniston and Courteney Cox are on the outs, according to a new report in Us Weekly. 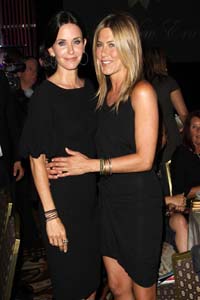 Jennifer Aniston and Courteney Cox used to be attached at the hip: They globe-trotted the world together, dined together and Aniston is even godmother to Cox’s adorable little girl, Coco.

Times are a changin’, though.

“There’s tension,” a source told Us Weekly of why the pair hasn’t been photographed together in over a year.

Aniston’s ire for Cox stems from her flings with her Cougar Town co-stars Josh Hopkins and Brian Van Holt.

“Jen thinks Courteney is acting callous by running around with this guy but refusing to file divorce papers,” a source close to Aniston told the magazine. “Like she’s playing mind games with David.”

Cox and Arquette filed for legal separation in October 2010, right around the time Arquette went on Howard Stern’s show and played the TMI game.

Aniston reportedly feels like Cox is playing the same games that Brad Pitt played on her when he dumped her for Angelina Jolie in 2005.

“She hates watching Courteney do the same thing,” the source said.

Also, Courteney Cox was spotted having a “friendly” dinner with Pitt in early May. Would she do that if she was still on the up-and-up with Aniston?

We don’t care the reason — get back together, Jen and Courteney!