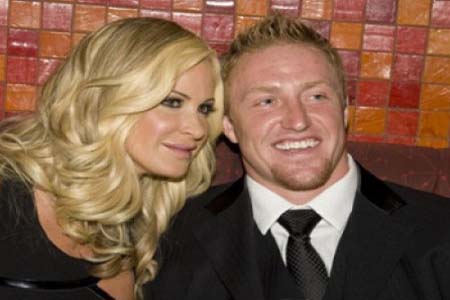 “[Kroy] and I are happy to announce the birth of our son today,” Zolciak, 32, tweeted Tuesday night.

“Kroy Jagger Biermann is healthy & beautiful,” the new mom added. “We are so in love.”

Baby Kroy is named after his Atlanta Falcons defensive end papa. The older Biermann, 25, met Zolciak at a charity event in August 2010 and Kim announced her pregnancy in November. The baby also joins Zolciak’s other children, Brielle, 13, and Ariana, 9.

We’re happy for the new family, but we feel bad that baby Kroy will have to see the weird naked photo of his parents — you know, the one they plastered in Life & Style in April.

“I feel like I’m just getting fatter,” Zolciak told the magazine. “He thinks I’m sexy. He makes me feel beautiful.” Kim continued to gush, “He’s just been the best partner.”

“This pregnancy has kicked my butt. Now I’m at the stage where I’m uncomfortable,” Zolciak added. Well, now she’ll have plenty of time for Botox, plastic surgery and new hair weaves now that the baby is here.

Do you think this is Kim Zolciak’s happily ever after?