American Idol champ Scotty McCreery chimes in on the “Country Bieber” nickname and his upcoming album.

American Idol champ Scotty McCreery is certainly “country,” but exactly how “Bieber” is he to earn the nickname “County Bieber?” 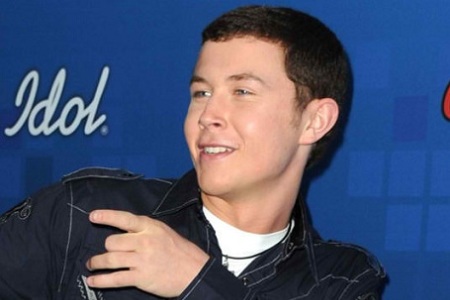 “Country Bieber… I mean, Justin Bieber is the epitome of [a] big star, so it was cool for me,” said McCreery to MTV. “I mean, Justin’s a whole lot further ahead than I am… so, I guess it’s mainly because of our age.”

Although McCreery and Bieber are both 17, that seems to be where the similarities end. Bieber is a high-tenor pop singer who favors R&B, while McCreery is a baritone country crooner.

They’re both, however, good-looking kids.

“Thank you, Lauren,” McCreery said. “I just figure it’s because of our age. Me and Justin are pretty much two young guns.”

We’ll be watching to see if McCreery can match the Biebs’ album sales. So far, Country Bieber’s I Love You This Big is the biggest-selling AI coronation song since David Cook’s The Time of My Life from season seven.

McCreery is cooking up his debut album.

“It’s gonna be a good ol’ country album,” McCreery said. “I like to have that old flavor in my music, but with a contemporary feel, so we’ll see where that leads me. I think it’ll be a good little mix.”

Catch him on the road on the American Idols Live tour, which starts July 6 in Utah.