Zack Morris, er, Mark-Paul Gosselaar, is back on the market now that his divorce from Lisa Ann Russell has been finalized. 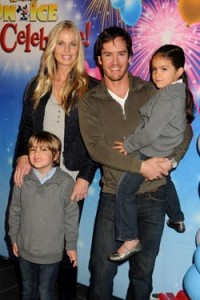 Mark-Paul Gosselaar, who will always be remembered as Zack Morris from Saved by the Bell, is officially divorced. Gosselaar and his wife of 13 years, Lisa Ann Russell, filed for divorce almost a year ago, in June of 2010, citing irreconcilable differences.

However, unlike some celebrity couples, the pair has kept it classy. They hired a mediator and agreed on joint custody of their children. Gosselaar and Russell have a five-year-old daughter, Ava, and a seven-year-old son, Michael. Records indicate that Gosselaar had already agreed to pay spousal support to his now ex-wife.

Gosselaar’s new television show, Franklin and Bash, premieres tonight on TNT. In it, Gosselaar stars as Peter Bash, an attorney who chases down clients with his buddy Jared Franklin (played by Breckin Meyer). Hopefully, Franklin and Bash will last longer than Raising the Bar, another TNT legal show Gosselaar starred in a few years ago. Raising the Bar was not renewed by the network after its second season.

Although divorce is never a happy occasion, we’re glad to see that Mark-Paul Gosselaar and Lisa Ann Russell handled theirs with grace. Other divorcing Hollywood couples should take their lead!