Italian officials have revoked Snooki’s international driver’s license after the Jersey Shore star ran into a police car in Florence. 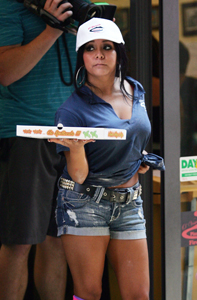 No more pizza deliveries for Snooki. The Jersey Shore star had her international driver’s license revoked after crashing into a police car in Florence on Monday.

Snooki crashed into a cop car with castmate Deena Cortese and a crew member in the vehicle with her. Although no one in her car was hurt, the two police officers involved — who were acting as her official escort — were brought to the hospital with minor injuries.

Road safety coordinator Mario Rondinelli said that Snooki’s license had to be taken away according to law because the officers had been injured. There is no penalty for making Italian Americans look like idiots.

But never fear, pizza lovers of Florence: Snooki will be back on the road in 15 days and able to deliver your pies again. The suspension is only temporary.

In the meantime, Snooki will have to rely on her castmates’ driving skills for GTL.