There has not been a film more shrouded in mystery this summer season than Super 8 and rightfully so — to know too much about it would ruin the majesty that is this truly fantastic picture. From executive producer Steven Spielberg and writer-director J.J. Abrams comes a film that plays on our childhood fantasies, fears and our fascination with the fantastical.

Super 8 is incredibly Steven Spielberg-esque while adding layers of J.J. Abrams‘ brilliance at capturing the wonder of, “What is it?” Abrams has mastered this ability, whether on his hit show Lost or with his film work producing Cloverfield or even directing the Star Trek reboot. As shown in Spielberg’s best work, such as E.T., the main characters are children and through their eyes, audiences are whisked into the thrilling world of Super 8. 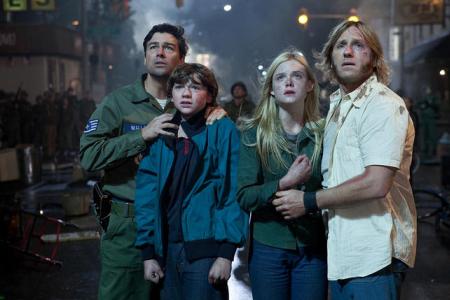 It is the summer of 1979 and a cast of teens is set to make their own zombie movie. They get their dream lead actress (Elle Fanning) and believe they are on their way to making an instant classic. While filming their movie’s climactic scene, a spectacular train crash sends them into peril. Dodging debris and running for their lives, it becomes immediately apparent that something is not right with this train.

After impeccably introducing audiences to his cast of characters, Abrams has choreographed one of the most spectacular crash sequences ever captured on film. Your mouth will drop in awe with the sheer sensationalism of his achievement. Once the dust settles, the Super 8 story takes off. And thus, where our highlighting of the story ends — remember, the less you know about Super 8’s plot, the more thrilling the cinematic experience. 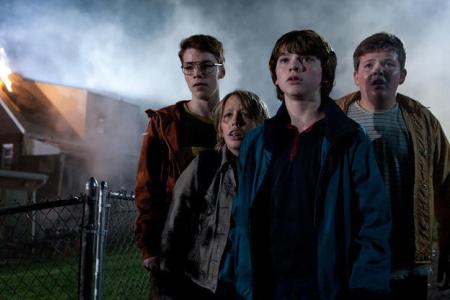 Abrams has captured his inner Spielberg and what Super 8 does so incredibly well is channel some of Spielberg’s greatest hits including the aforementioned E.T. with its government goons hiding the truth, Goonies in its capturing the joy of youth, Close Encounters’ what is out there feel and even Jurassic Park’s suspense.

The casting of the teens is a stroke of genius. Abrams’ lead, Joel Courtney, perfectly nails the innocence of youth peppered with the dawning of adulthood. Elle Fanning also shines in her ability to portray the pain of a broken home coupled with the uncontrollable teen tendency to want to wander into life’s mysteries. Courtney’s father is played by Friday Night Lights star Kyle Chandler in his best work on film. He sizzles and, in many ways, anchors the story. Through his eyes, the mystery unfolds for the audience. He is asking the questions we seek and rarely gets the answers we want. 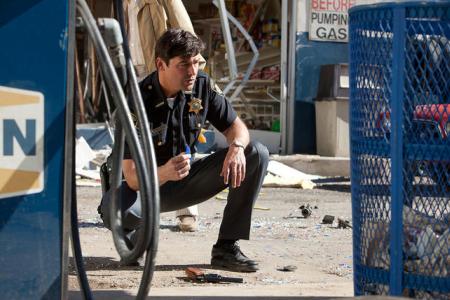 The title of the film stems from the kids’ use of the Super 8 camera that films their zombie movie. It also may or may not hold the clues to answering the mystery of what is out there and why several of the small Ohio town’s people and dogs have gone missing.

Super 8 is sensational on every front. The film reminds us why we go to the movies, particularly summer movies. In a season full of sequels and superheroes, Super 8 stands tall above them all as the most original, thrilling and tantalizing film in ages.

Overall, you know you want to know: What is the #Super8Secret?