Sean Kingston is expected to make a full recovery after a jet ski crash in Miami. New details have emerged on the singer’s injuries, as well as what happened over Memorial Day weekend. 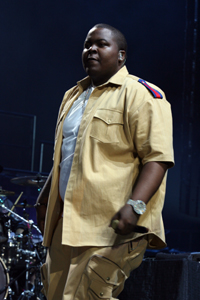 Sean Kingston’s injuries after a jet ski crash include a broken jaw, fractured wrist and water in his lungs — but he is expected to be fully healed in six weeks, a source tells CNN.

The singer was listed in “critical but stable condition” on Tuesday after he and passenger Cassandra Sanchez crashed into a Miami bridge over Memorial Day weekend.

“Both jet skis pulled out of the dock at the same time and we were going so fast we just blasted past them,” Sanchez said. “When we turned a corner and crashed… they were so far behind us they didn’t even see us crash.”

She said she told Kingston to turn around as they were heading toward the bridge, but he lost control of the jet ski. Sanchez says she remembers being “in pain” and waking up in the water. Kingston was not completely conscious and was “coughing up blood, foam and pink stuff” and kept repeating “I’m hurting.”

She said a rescue boat finally came to help them. Sanchez says she has sore ribs and a sore jaw, but is doing fine. Kingston has “a tube down his throat” but she says he is responsive.

New sources today are confirming to CNN that the Beautiful Girls singer should recover fully in six weeks.