America’s Got Talent premiered its new season May 31 and already there are some cute acts we can’t wait to see in the Vegas round. SheKnows thought we’d give you a little taste of cuteness from the first set of audition rounds in case you missed it. Ladies and gentlemen, we give you Debbie and Danny — Vegas Birds.

With so many of the same acts like singers, magicians and dancers hitting the America’s Got Talent stage during the season six premiere, it was nice to see an animal act with intelligence. 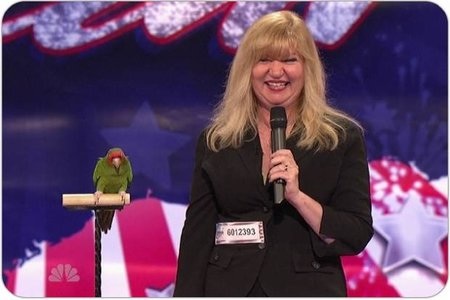 Debbie (owner) and Danny (the parrot), otherwise known as Vegas Birds, weren’t your average mom and bird act. They set their act up so it read more like a comedy set compared to the repeating bird syndrome it could have been.

Debbie opened by asking Danny what people tell him all the time and he interrupted her: “Shut up.” From there it was Danny meowing like little kitties and barking like big bad dogs.

Perhaps the part of the act that was the coolest and even left Piers Morgan on his feet and dumbfounded, was when Debbie mimicked an animal and Danny shouted out what the animal was. It was absolutely amazing that Danny knew exactly what the animals were.

Our fine feathered friend even took a cute little bow at the end, with barely any cue we might add, and flew his way to Vegas for the next round.

Debbie added that she has birds that can do things we’d only imagine, so we’re hoping they can top Danny because he was just amazing.

Check out a video of Debbie and Danny on America’s Got Talent and tell us what you think.