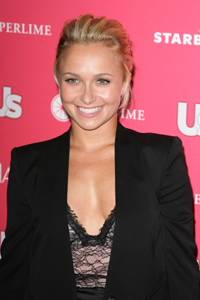 Panettiere, 21, was snapped leaving In-N-Out Burger in Laguna Hills, California with the 24-year-old stud. They were smiling, wearing similar white t-shirts and jeans. “They seemed very close and very happy. When they walked out of the fast food restaurant, Mark was flashing a huge smile,” a source told Nydailynews.com.

This is not the first time that Sanchez and Panettiere were spotted together. They were seen chatting back in February at a pre-Oscars bash at the Chateau Marmont, where the two had a “private half-hour chat” and “the flirting was mutual.” Panettiere broke up with her boyfriend Klitschko in May, saying their long distance relationship was too much.

“Even though we’ve decided splitting up is best for both of us, we have an amazing amount of love and respect for each other and remain very close friends,” she told Us Magazine.

The 5-foot-1 actress seems to like tall and dark athletes! Her ex-boyfriend, Klitschko, was 6 feet, 6 inches tall and Mark Sanchez is 6-foot-2. The actress told Ellen DeGeneres, back when she was dating Klitschko, that she “gets the prudest people coming up to me and they’re like, ‘Does it work?’ Yeah, it works. We find a way.”

Maybe a little TMI, but at least Hayden cleared the air!

Are Panettiere and Sanchez just friends — or friends with benefits? We’ll have to wait and see on this one.