Actress Brooke Shields, who graduated from Princeton in 1987, spoke to the Princeton senior class on Class Day. “When The Daily Princetonian mentions God as the most notable Princeton alumni after Brooke Shields, you know you’ve made an impression,” Princeton president Shirley Tilghman said in the introduction. 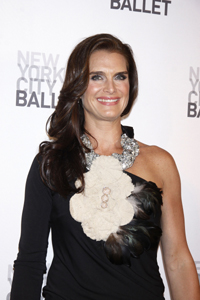 Actress Brooke Shields joked and reminisced about her Princeton days when talking to the senior class, telling them that her high school advisor said she “probably would not get into Princeton, let alone graduate.”

“You survived, through all of the hard work, the fear, the anger, the tears, the fatigue, the joy, the sadness, the feelings of success, the love, the excitement, the fun — and that was all just during Nude Olympics,” she said.

She talked about having her grades published in Life magazine and an Enquirer photographer attempting to sneak photos of her in the shower, but said, despite that, she had a normal and “conventional” time at Princeton.

“I urge you to surround yourself with good and honest people… to not let fear inhibit you,” Shields said. “I beg you to never settle for less.”

“With all due respect, you are all a bunch of tools,” she said. “You are tools that we need to fix this country… Go be bankers, be politicians, be scientists, be artists, be thinkers, but you need to figure out what kind of tool you want to be.”

Shields was presented with a beer jacket and was inducted as an honorary member of the class of 2011.