Some photos just leaked online that purport to show Gossip Girl star Blake Lively in the buff. Do you think it’s her? 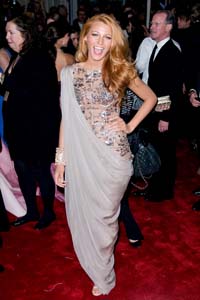 Uh oh, scandal alert! Naked photos of Gossip Girl star Blake Lively have leaked onto the web. Well, we’ll say the pictures are allegedly of Leo DiCaprio’s new girlfriend, but it looks a lot like her.

The NSFW photos — first posted by Perez Hilton — purportedly show Lively posing in a posh bathroom sans any sort of clothing. She’s gorgeous, but we never thought she’d be the type to do that.

Also — the photos have to be pretty recent. It looks like she’s taking the photos with a white iPhone 4 that came out just a few weeks ago.

“I feel like a tranny a lot of the time,” Lively said in a recent interview with Allure. “I don’t know, I’m… large? They put me in six-inch heels, and I tower over every man. I’ve got this long hair and lots of clothes and makeup on. I just feel really big a lot of the time, and I’m surrounded by a lot of tiny people. I feel like a man sometimes.”

Uh, don’t worry, Blake. No one will think you’re anything but all woman after seeing these pictures — and we’re sure DiCaprio won’t mind.

There’s one thing we can expect her to keep behind lock and key, though: Her relationships with leading men.

“Yeah, I don’t comment on my relationships, so you can skip that one!” Lively told Allure when asked about her relationship with now-ex bf Penn Badgley. “My anonymity is something I treasure. Wanting to be an actor and wanting to be famous are different.”

All we know is — wow, we want Blake Lively’s life.

“The photos of Blake Lively which have just surfaced on various websites including Perez Hilton and Zap2it.com are 100 percent FAKE. Blake has never taken nude photos of herself. Blake will pursue legal action against the publication which initially published these photographs and any other outlets that republish them in any manner.”