Kevin Bacon and his wife Kyra Sedgwick were among the many celebrities who lost money in the $50 billion Ponzi scheme by jailed investor Bernard Madoff. The X-Men: First Class actor has opened up for the first time about the ordeal to Details magazine.

Six degrees of Kevin Bacon just got more interesting with his addition to the X-Men: First Class movie. The actor admits the role for the blockbuster came “totally out of the (expletive) blue,” however, the work is welcome — especially as he and his wife Kyra Sedgwick are trying to put their finances in order after they lost money in the Madoff Ponzi scheme. 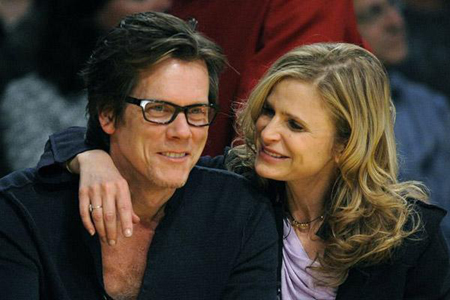 “I’m not going to say it didn’t have its emotional downsides,” he tells Details magazine. “But [Kyra and I] are both young, and we both had the ability to work and roll up our sleeves and start putting the pieces back together. The truth is that we went through it together.”

In fact, he admits that losing money has impacted professional decisions he has made, as far as which roles he takes. “While I try to have integrity about the work that I do and the choices I make, I’ve also said from a very young age that I need to work. I don’t think I suffer from the disease of specialness.”

Bacon’s publicist has given little detail regarding how much money Bacon and Sedgwick, who stars in The Closer, have lost, only saying: “I can confirm that they had investments with Mr. Madoff — no further specifics or comment beyond that.” Other celebrities who have lost money in the Madoff Ponzi scheme include Steven Spielberg and Eric Roth, who wrote The Curious Case of Benjamin Button.

Bacon, 52, is playing a villain in X-Men: First Class, which appears in theaters Friday, June 3.