Former Dancing With the Stars contestant Niecy Nash got married this weekend. Find out why she didn’t wear a quinceanera gown for her second wedding. 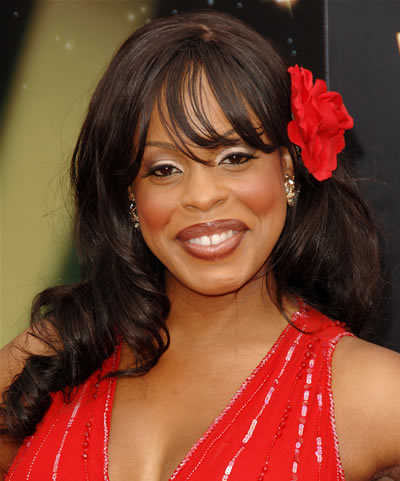 Niecy Nash didn’t literally dance down the aisle, but she did walk down it to marry electrical engineer Jay Tucker over the Memorial Day weekend. The former Clean House host and Dancing With the Stars contestant married her fiancé on Saturday in a ceremony that took place at the Church Estate Vineyards in Malibu, California.

“It was a dream come true to be surrounded by family and friends as I married the most wonderful man,” Nash told Life & Style. She stunned in an off-white strapless gown with a ruffled train. A flower and lace headband adorned her updo. She was supported by 10 bridesmaids who wore floor-length purple dresses, and singer and actress Cheryl Lee Ralph was Nash’s matron of honor.

Nash and Tucker have been engaged since September 2010. They were surrounded by 200 friends and family members, including Sherri Shepherd of The View and Holly Robinson-Peete of The Talk.

If you want to watch the nuptials, Niecy Nash’s Wedding Bash, a two-hour special, will air on TLC on June 4.

It looks like Nash got it right this time around, as she wore a real wedding dress and married a man she seems very in love with. We wish Niecy Nash and Jay Tucker the best in their new marriage.