The head of an Italian American group is furious over the Snooki fender bender in Italy, calling the Jersey Shore star America’s worst export. 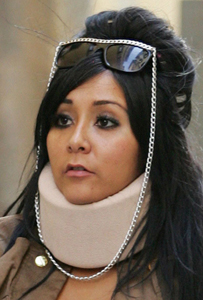 Jersey Shore star Snooki crashed her car into a couple of Italian cops in Florence — and while thankfully everyone is okay, Italian American group UNICO is furious over what it deems as another buffoonish portrayal of their own.

“She really is the lowest of the low and will do anything for attention, even hitting a police car,” UNICO President Andre Dimino told RadarOnline.

“She is our worst ever export and is an embarrassment for Italian Americans and our whole country.”

“For MTV to go and film in Italy was totally ill conceived, and this latest incident has just added insult to injury as far as I’m concerned.”

“The whole situation is actually really sad, and it is painting our country in a terrible light.”

UNICO blasted Mob Wives for their portrayal of Italian American women in April.

Sounds like Dimino is implying Snooki crashed into the car on purpose for publicity. Could that be? If so, everyone involved would have had to have been in on it, including MTV and the cops that were hit. Otherwise, considering the fact that Florence doesn’t want Jersey Shore filming there anyway — the mayor of Florence issued a long list of rules Jersey Shore has to follow — they would risk being kicked out.

Tell us: Do you think the Snooki car crash was a set-up?

read on for more jersey shore

Jersey Shore: Too fast, too reckless for Italy?
Mike Sorrentino has a situation: His dad
Jersey Shore‘s Angelina: Pregnant & dumped