Frank Sinatra had a sense of danger, writes ex-wife Barbara Sinatra in a new memoir. 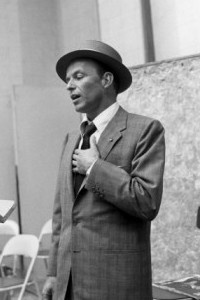 Related story Frank Sinatra sang the worst song ever for Married... with Children

It was also very real to his fourth wife, Barbara Marx Sinatra, who describes Ol’ Blue Eyes as having a “Jekyll and Hyde” personality in a new book, Lady Blue Eyes: My Life with Frank .

“A big part of Frank’s thrill was the sense of danger he exuded, an underlying, ever-present tension only those closest to him knew could be defused with humor,” wrote Marx Sinatra in Lady Blue Eyes.

“He could be moody,” Marx Sinatra told Good Morning America on Tuesday. “I didn’t want to be around him if he drank gin. Gin, I think, made him mean. So when I came out of my room and saw the gin bottle on the bar, I’d turn right around and go back into my room and lock the door because I didn’t want to deal with it.”

A game of charades became dangerous, Marx Sinatra writes, when she told Frank time’s up.

“Frank snatched the clock from my lap and gripped it tightly in his hands. For a moment I thought he might hit me with it. Refusing to be intimidated, I stared him out until he turned and hurled the clock against the door, shattering it into a hundred pieces.”

Sinatra was also obsessed with cleanliness.

“He was a guy who took about 12 showers a day,” Marx Sinatra said. “I mean, he was neat. He always smelled of lavender.”

Marx Sinatra, 84, is a former Vegas showgirl who is also the ex-wife of Zeppo Marx of the Marx Brothers. She was married to Frank for 22 years until his death in 1998.

“He was a great kisser,” Marx Sinatra said. “He made me feel special and he put me on a pedestal.”