Republican presidential candidate Mitt Romney admits that he’s a fan of the Twilight series. The big question: Is he Team Edward or Team Jacob?

Every presidential candidate knows he or she has to nab the youth vote, but is GOP candidate Mitt Romney going a little too far with the schtick? 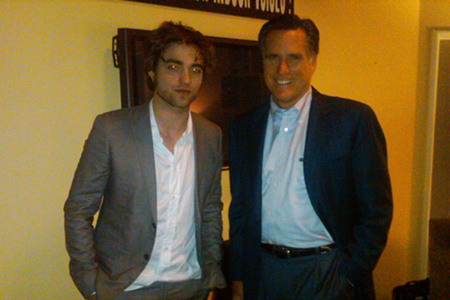 “I like silly stuff, too,” Romney told NBC News reporter Jamie Gangel during an interview. “I like the Twilight series. That was fun.”

And Romney means it — he tweeted a photo last year with Edward Cullen himself, Robert Pattinson. That grin makes us think that he’s more Team Edward than Team Jacob, though Pattinson looks less-than-thrilled in the photo.

Twilight isn’t the only pop culture Romney admits to enjoying — he’s said that he enjoys reading books like Battlefield Earth and watching shows like American Idol and South Park. He even said that he planned to take in a performance of Matt Stone and Trey Parker’s Broadway show The Book of Mormon, a satire based on Romney’s Mormon faith.

“South Park is funny,” Romney said. “You know your faith has made it big time when people poke fun at you on Broadway.”

That’s great and all, Mitt: But what about the real issues like the economy and healthcare?

Oh, who are we kidding? We just want to know if he loved or hated The Hangover Part II.

Do you care whether or not presidential candidates keep up on pop culture?