Hip hop pass-around Amber Rose is miffed about a Vibe article that makes her look like an image-obsessed hanger-on. 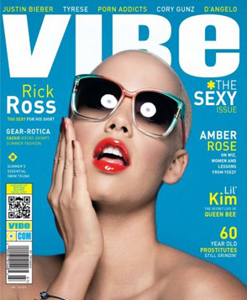 Amber Rose is best known as the ex-girlfriend of Kanye West, but her reaction to a new article about her in Vibe is getting her lots of attention today.

Amber is on the cover of the latest issue of Vibe, but the… um… model? Is she a model now? Let’s call her a model. The model is upset that the mag didn’t exclusively use all her own self-serving quotes and painted her in a rather unflattering light.

What did they say to tick her off so badly? Animal New York thinks this is the golden nugget:

The high-profile relationship took a turn in Hawaii during Kanye’s recording sessions for his cathartic fifth album, My Beautiful Dark Twisted Fantasy. West booked an entire Honolulu studio indefinitely for 24-hour slots while a cast of artists joined him for long days of business. Rose allegedly didn’t take to the all-work, no-play atmosphere. “In Hawaii [Amber] was being obnoxious in the studio like, ‘What the [expletive]? I wanna [expletive] eat,'” says an anonymous source. “Kanye got so mad because here he is trying to record and she keeps talking about, ‘Let’s go back to the house, I wanna [expletive]. We haven’t [expletive] in two days.’ I left the room for 10 minutes and when I came back he [told her], ‘Yo get the [expletive] up out of here!’ She left the room crying.”

Amber Rose, who was Reggie Bush‘s rebound chick after his breakup with Kim Kardashian, ranted about the article on Twitter.

“Just read ‘my’ interview in @VibeMagazine half of the story was untrue & ridiculous!” she wrote.

“Yall don’t give a [expletive] that I have a Mom & Family thats gonna read that fake [expletive] I gave yall a truthful interview & Yall [expletive] me.”

And here’s the best one: “I’m so sick of keeping my mouth shut I didn’t ask for this life it was handed to me I was nothing but nice to everyone I spoke to @ Vibe.”

That’s right, kids: Amber Rose, who has made a career out of who she dates, did not ask for this life.

It takes a lot to make the ego of Kanye West look small by comparison, but somehow Amber Rose just managed to do so. No wonder he dumped her.