Andy Dick finds himself with more legal problems, as a Dallas man is suing Dick for allegedly exposing himself in a Texas nightclub. It seems the comedian just can’t stay out of trouble. 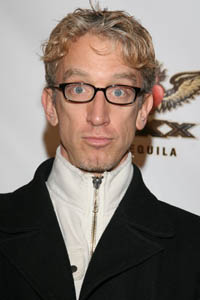 Comedian Andy Dick is facing a lawsuit in which the victim accuses Dick of exposing himself and rubbing his genitals against the victim.

The incident took place at a Dallas, Texas nightclub last December. Robert Tucker claims that he was at the comedy club, attending a show of which Dick was the star. As part of his act, Dick was dressed as a woman, wearing a red skirt, a black top and a wig. At a certain point, Dick left the stage and walked through the audience.

According to Tucker, he requested an autograph from Dick. Dick approached him and “pulled down his costume skirt with his right hand, exposing the fact that he was not wearing underwear beneath the skirt.” Then, Tucker claims, Dick “forced” his genitals against Tucker’s face.

Tucker claims the incident caused him emotional distress and defamation, leaving him “degraded and humiliated.” He also states that he has been harassed by his coworkers, who were present at the club when the crotch attack took place. The lawsuit seeks unspecified damages.

Flashing unsuspecting onlookers is a staple on the troubled star’s resume. Last year, Dick was accused of flashing attendees at a party, from which he was subsequently asked to leave, as well as a group of customers in a Los Angeles coffee shop.

Earlier last year, Dick was arrested for sexually abusing a bouncer and a patron at a West Virginia club.