If you’ve made the decision to move into an old mansion, you kind of signed up for monsters. In the new trailer for the highly anticipated Guillermo Del Toro produced film Don’t Be Afraid of the Dark, Katie Holmes, Guy Pearce and Bailee Madison play a family who moves into a creepy old house. And they’re not alone.

First off, let me just say that Bailee Madison’s resemblance to Katie Holmes is super creepy as well. 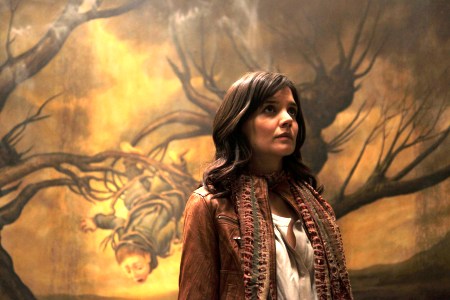 But the Don’t Be Afraid of the Dark trailer will have you sleeping with the lights on. This film is a remake of the 1973 thriller and was co-written by Del Toro.

First-time director Troy Nixie has the helm. In the trailer, Madison plays Sally Hirst, a little girl who moves into an old mansion with her father (Pearce) and his girlfriend (Holmes). Mysterious voices (and they don’t sound like cute little elves) invite Sally to play. They hate the light and Sally tries everything to keep them at bay.

The final shot of the trailer is actually going to make me sleep without sheets as well.

Check out the preview and let us know what you think! Don’t Be Afraid of the Dark will hit theaters on August 26.

Don’t Be Afraid of the Dark trailer debut