The Muppets continue to poke fun at movie genres by taking on this week’s box office champ The Hangover: Part II. We’ve all heard of the Wolf Pack, but have you heard of the Fuzzy Pack? They include Kermit, Gonzo, Fozzie Bear, and humans Jason Segel and Amy Adams.

The new trailer for The Muppets is a blatant rip-off of the teaser trailer that was released months ago for The Hangover: Part II. It has the same concept and the same excessive slow motion but it’s much funnier! 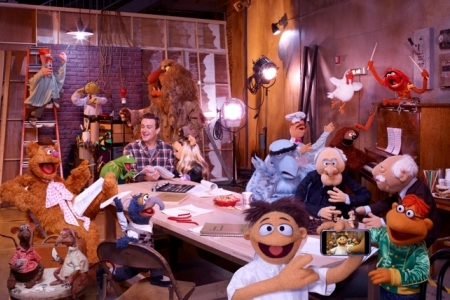 The Fuzzy Pack has the upper hand on the competition because they’ve received glowing reviews from several publications that may or may not exist. Being Green Magazine said they’re “the Xanadu of family entertainment.” And according to Waste of Time Magazine they’re “absolutely hilarious. Sometimes on purpose!”

Take that Todd Phillips! Not only does the new Muppet movie have cameos from A-list stars like Jack Black and Billy Crystal, the trailer has Danny Trejo and Wanda Sykes. That’s just the tip of the comedic iceberg!

The Muppets is directed by James Bobin and was written by Jason Segel and Nicholas Stoller. Get ready for the Fuzzy Pack to invade theaters this Thanksgiving on November 23.

The Muppets trailer spoofs The Hangover 2