Vanity Fair is revealing a never-before-seen engagement photo of Will & Kate — and SheKnows has it! 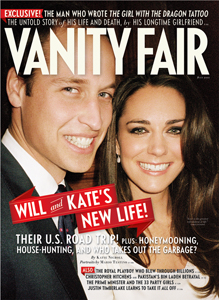 Can’t get enough of Will & Kate? Neither can we! Luckily the newly-minted Duke and Duchess of Cambridge saved some special engagement photos for us to drool over after the wedding.

Snapped by Mario Testino, a favorite photographer of Prince William‘s beloved late mother Princess Diana, the photos in the July issue of Vanity Fair show a wildly happy couple all smiles before the camera.

More photos of the couple are included inside, as well as a series of portraits of Diana by the famed Peruvian photographer.

In the accompanying article, Vanity Fair writer Katie Nicholl reports that Wills intends to continue to be called Prince William — none of this Duke business — and by default Kate would be referred to as Princess Catherine, despite that not being her official royal title.

The cover is a great precursor to the royal couple’s first official visit to North America from June 30 to July 10.

The July issue of Vanity Fair is available on newsstands June 7.

read on for more william and kate