Kevin Bacon and January Jones are the baddest of the bad in X-Men: First Class and sat down in New York City recently for an exclusive video interview to chat about what it means to be bad. 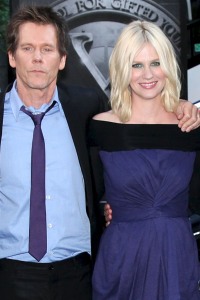 When we walk into Kevin Bacon and January Jones’ suite at the Ritz Carlton Central Park, it is immediately clear these two have chemistry. Bacon is making sure the pregnant Jones is comfortable, complete with a chair to rest her feet upon. It is a far cry from the evil embodied that the duo portray in the new film X-Men: First Class.

Bacon is Sebastian Shaw, also known as Dr. Schmidt, the foil for our burgeoning heroes that will become the X-Men. It is established early in the film that he is downright wicked when he first encounters Michael Fassbender’s Erik Lehnsherr (who would grow up to be Magneto) in a Nazi concentration camp.

His partner in crime, Jones, portrays Emma Frost — a character willing to do almost anything to ensure Bacon’s evil plan is seen through to fruition. Together, the dastardly duo wreaks havoc on the early 1960s world and brings the United States and the U.S.S.R. to the brink of World War III.

X-Men: First Class takes the franchise back to the beginning, before there was the Xavier School for Gifted Youngsters. James McAvoy is simply Charles and Fassbender is only Erik and by the end of the film, their growth into Xavier and Magneto will be complete.