American Idol winner Scotty McCreery got to enjoy the upside of fame with a special trip to Disney World. But with the trips and glamorous plane rides also come the mobs of fans.

American Idol winner Scotty McCreery took some time out of his post-American Idol schedule to visit Mickey and Minnie Mouse at “The Happiest Place on Earth” on May 30 — Disney World. 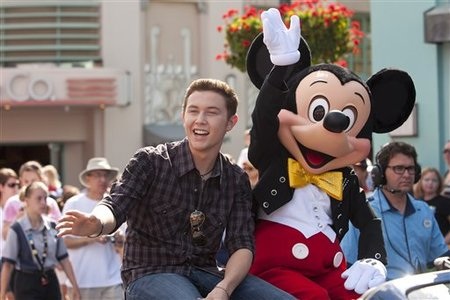 According to the Daily Mail, upon his arrival the teen was flocked by excited fans who lined up along Hollywood Boulevard at the Disney Hollywood Studios theme park to catch a glimpse of his motorcade during a celebratory parade for the Idol winner.

Once the fans were done swooning and screaming over Scotty McCreery, he took the stage to perform his new single I Love You This Big in front of the American Idol Experience attraction.

Imagine taking on that attraction and being selected to perform in front of a live audience — okay, that’s not really the point here.

It hasn’t all been fun and games for the newest American Idol. Scotty McCreery has been promoting the new single he performed to rave reviews on the finale.

So much for relaxing with SportsCenter and eating chips. Think he got the Ford F150 yet?

The country cutie took some time out to send a tweet to his adoring fans: “Gonna catch a few zzz’s real quick on this plane. Not gonna be a lot of sleeping these next couple of days for me. haha.”

Gotta love the kid’s sense of humor. Are you excited for Scotty McCreery’s future recordings and to see him live on the American Idol tour this summer? Check out his performance during the Memorial Day celebration!