The Bachelorette‘s Ashley Hebert took a gamble on love in Vegas this week. Read on to find out what went down in Sin City.

On this week’s new episode of The Bachelorette, Ashley Hebert packed up her men and headed to Vegas for a little fun and dancing in the land of sin. 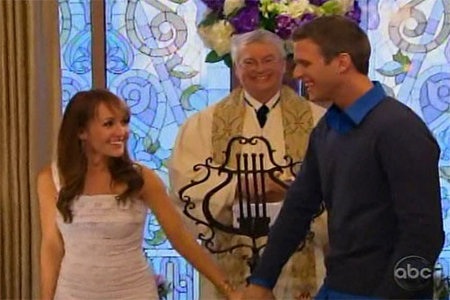 First, we should tell you three roses were up for grabs in the date rounds — one in the group date and two in the individual dates.

Ashley Hebert wasted no time hopping a plane to Vegas with William for the first individual date. Poor William never saw it coming. The entire date centered around weddings with cakes, rings and a practice walk down the aisle — the works.

He took the bait and Ashley had to stop herself from saying “I do,” primarily because there were 17 other men waiting for her. William did get a consolation dinner and a first kiss in front of the fountains at the Bellagio’s water extravaganza. She pinned that rose on him good.

William wasn’t the only guy enjoying Las Vegas with Ashley. Constantine, Ryan M., Chris, Ben F., Nick, Bentley, West, Lucas, Stephen, Blake, Matt and Ames jetted off to meet their girl at the Monte Carlo Resort and Casino for the group date, where they got their dance on with the super-group Jabbawockeez.

Two teams of six men were put to the test, constructing a dance routine that would either keep them in Vegas or send them back to LA. Stephen’s (No Rhythm Nation) crew totally got served when Ben F. (The Best Men) cleverly helped his team put together a routine that used Ashley in a bigger way.

After their hip-hop performances, West opened up about his past and the loss of his wife and you could tell Ashley did not know what to say. Bentley continued to lay it on thick and she fell for it handing him the second of three date roses. It was a group date rate, but a rose nonetheless.

Back at the mansion in Los Angeles, J.P. and Mickey had to flip a coin to see who got the other individual date. And the winner was Mickey. He joined Ashley and the rest of the guys in Vegas for the last date of the episode.

The couple kicked back with an intimate dinner and special performance by Colbie Caillat. They just keep getting the best performers to pop up on these dates, don’t they? He didn’t even need the coin toss at the end of the date to help get him the rose. It was his for the taking. 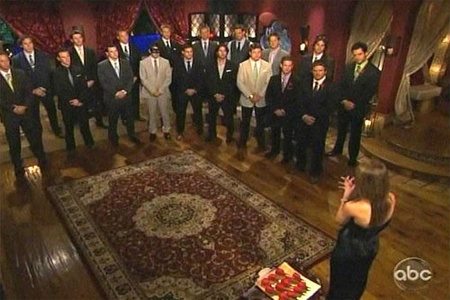 Back at the rose ceremony, Jeff revealed his past which includes a divorce and then almost took his mask off — too bad he got interrupted. Bentley also continued his sly game of wooing Ashley while secretly not feeling her romantically.

Stay tuned, because next week Bentley supposedly plays Ashley in a way that has never been done on the show — remember, we said supposedly.