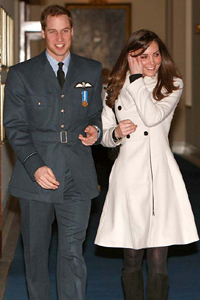 Prince William and Kate Middleton, who is now officially known as Catherine, Duchess of Cambridge, are planning an 11-day tour to North America, with the majority of their time spent in Canada.

Called “their first royal tour,” the newlyweds will visit Canada, where a St. James Palace source says they will experience “the diversity, vibrancy of Canada, its geography and people.”

Here is their itinerary for Canada:

They will then leave Canada and fly to Los Angeles on July 8 — but don’t expect them to be hobnobbing with the celebrities! “The couple views this as a working visit, not as an opportunity for them to meet celebrities,” a palace source says.

Further details of their trip are expected to be released mid-June.

Although some say that Kate will have at least 40 different outfits on her travels, royal writer Judy Wade tells People they are mindful of the recession and do not want to flaunt their wealth.

“Kate is aware of the recession and cutbacks that people are facing, and will not want to be seen to be extravagant, but she is realizing that you cannot be in the public eye and be a fully-fledged royal without help with a dresser or someone like that,” she says.