The new trailer for The Girl With the Dragon Tattoo is out! Check out the first images of Rooney Mara as Lisbeth Salander in this David Fincher directed movie. 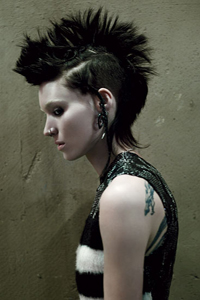 The new trailer for the English version of The Girl With the Dragon Tattoo almost feels like a Trent Reznor music video. There is no dialogue, but plenty of images, including snowy roads, Daniel Craig covered in blood, motorcycle chases, overturned cars, shower scenes — and tattoos.

As the Yeah Yeah Yeah’s singer Karen O and Trent Reznor’s collaboration of Led Zeppelin’s Immigrant Song plays, you get the first feel of this anticipated and edgy film.

Based on the bestselling novel by Stieg Larsson, the movie stars The Social Network’s Rooney Mara, who chops her hair, dyes it black, pierces her face and gets tattoos for her new role as Lisbeth Salander. Mara’s tattoos may be fake, but she said the piercings, which include nose, eyebrow, lip and nipple, are all real.

“I didn’t even have pierced ears. They put four holes in each ear, and, weirdly, that hurt the most. It was all very organized,” she said. “With David [Fincher], everything is measured and carefully considered. He wants what he sees in his head.”

The Girl With the Dragon Tattoo, dubbed “the feel bad movie of Christmas” in the trailer, is slated for release on December 21, 2011. Warning: The trailer below is the red band version and contains material not fit for younger audiences.

Watch The Girl With the Dragon Tattoo trailer: