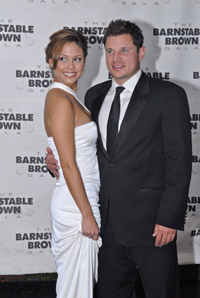 Vanessa Minnillo and Nick Lachey enjoyed a romantic sunset wedding shower on Sunday at the London Hotel in West Hollywood.

“Their party took in the private rooftop garden surrounded by tall hedges and several security guards,” a source tells Us Magazine. “The area was closed to the public and roped off. There were white couches, chairs and ottomans set up on the lawn area to create a lounge feel… A DJ spun lounge music and a big bar was set up with martini glasses.”

The couple, who got engaged last November after four years of dating, stayed close together all night. “They were holding hands and walking around greeting people. They both seemed very excited for the party and to spend the weekend with their closest friends,” an insider revealed.

Lachey, who used to be married to Jessica Simpson, and Minnillo danced with guests “until the late hours” and received shower gifts that included Waterford champagne flutes, a Feinberg English Silver wine funnel and Juliska Berry & Threat whitewash dinnerware.

The couple hasn’t said exactly when or where they plan on getting married, only hinting that the “countdown has begun.”

“You know, the clock is ticking, so we’re getting dangerously close. That’s all I can say,” Lachey said.