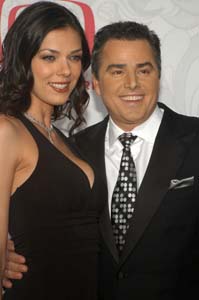 It was a match made on reality television — but this fairy tale may not have a happy ending after all. After six years together, Christopher Knight and Adrianne Curry have announced their separation.

“After starting a relationship with what seemed to be irreconcilable differences, the couple has reached a period where those differences are no longer appreciated,” their rep said in a statement.

“The decision was mutually reached after it became clear to both that some perspective was needed in order to assess their unique union. Not unlike all marriages, work must be put in.”

Knight, who got his big start in the biz playing Peter Brady on The Brady Bunch, met America’s Next Top Model winner Curry while filming The Surreal Life. They brought their wedding and tumultuous relationship to the small screen on My Fair Brady.

“Obvious to both Knight and Curry was that their marriage would require more effort than a garden-variety relationship,” the statement continued.

“They are taking time to see if they want to continue to put in that extraordinary effort. The couple has mutually determined that they are at a place where moving forward will require a step back. They still love one another but need some distance to consider their future.”

Could Adrianne Curry’s raunchy Howard Stern interview have something to do with their split? Knight has always come across as the much more private and conservative of the two — perhaps her full disclosure of adult toys and ex sex was the straw that broke the camel’s back.