After six years and six children, are Brad Pitt and Angelina Jolie finally getting ready to get married? 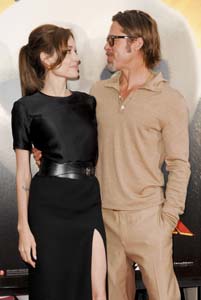 Brad Pitt and Angelina Jolie are arguably the most controversial celebrity couple since Elizabeth Taylor and Richard Burton. Now, after six years, six children and thousands of pages of media speculation later, the couple may finally marry!

Pitt has long used the excuse of “Angie and I will consider tying the knot when everyone else in the country who wants to be married is legally able,” to brush off questions about whether the two would ever wed, but the actor seems to be changing his tune — and it’s all because of the kids.

“The kids ask about marriage. It’s meaning more and more to them,” Tree of Life star Pitt told USA Weekend. “So it’s something we’ve got to look at.”

Last summer Angelina Jolie told Good Morning America that the pair would wed if the kids wanted them to do so. “I think it would be hard to say no to the kids,” she said.

Imagine the prenup these two would have?

Tell us: Should Brad Pitt and Angelina Jolie finally tie the knot?