Avril Lavigne put on quite a show at the Tampa Bay Rays game when she threw out the first pitch — and dropped the f-bomb at the family-friendly Tropicana Field. 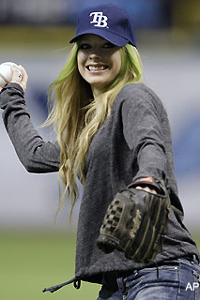 Avril Lavigne threw out the first pitch at the Tampa Bay Rays versus Cleveland Indians game, however, it is not her arm that is getting attention, but her profanity-laced tirade at the post-game concert.

The Canadian singer, who is currently dating Brody Jenner, was booed after her microphone stopped working and she reportedly started yelling profanities and dropping f-bombs, saying something about how live shows at baseball stadiums seem to have a few glitches. Some reports are saying Lavigne was yelling the profanities at the booing crowd, while others say she was just yelling them out to no one in particular.

Either way, the Tampa Bay Rays are not impressed, saying in a statement from Rick Vaughn:

“The Rays demand profanity-free performances from all of our concert performers and we are extremely disappointed by the language used in last night’s show. It is not consistent with the family-friendly atmosphere that Tropicana Field is known for.”

Her rep hasn’t commented on the incident, and her most recent tweets didn’t give any indication of trouble brewing.

“At the Tampa Bay Rays vs Cleveland Indians baseball game,” she tweeted. “I just threw the opening pitch and playing a concert after the game! Fun :)”