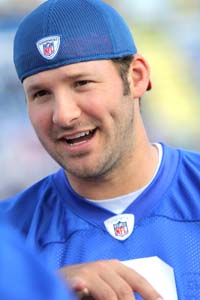 In attendance were singer Ashanti, the bride’s brother and Gossip Girl star Chace Crawford, football legend Troy Aikman and Cowboys owner Jerry Jones, who had to receive special permission from the league to attend the festivities due to the NFL lockout.

“I’ve gotten special permission,” Jones told ESPN’s Ed Werder before the nuptials. “But more than anything, [I got the] right ticket from him and his fianceé — Romo’s wife-to-be. [It’s] one of the prettiest invitations I’ve ever seen.”

Not receiving one of those pretty invitations was Romo’s ex Jessica Simpson, who is in the middle of planning her own wedding, or Romo’s other famous exes Carrie Underwood and Sophia Bush.

The couple’s huge wedding reception was held at Arlington Hall, a mansion in Dallas’ Lee Park.

“It was perfect!” a guest told People. “From the ceremony in beautiful white, to a vibrant after-party and great music selected by Tony himself.”

Crawford, 24, told Dallas Cowboys blog Blue Star that the day was everything she dreamed of and more.

“You dream about this as a little girl,” Crawford said. “You don’t dream, though, that Badgley Mischka is going to do your bridesmaids’ dresses, and you don’t dream that people are going to give you the support that they have. So we’re just really thankful… Getting married is an exciting, sacred thing.”

Want to buy the happy couple a gift? Tony Romo and Candice Crawford are registered at Crate & Barrel and Macy’s.