Justin Timberlake added another line to his impressive resume: Indianapolis 500 winner! Okay, he didn’t win the race himself — but a car his William Rast clothing company sponsors did!

Justin Timberlake is a pretty happy man right now: The Indy car his William Rast label sponsors with driver Dan Wheldon came from behind to win the Indianapolis 500 on Sunday. 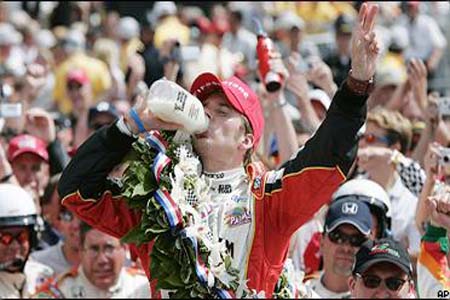 “Congrats to Dan Wheldon, the WR racing team and everyone else who put in the hard work for this victory! Unreal!”

The Indy 500 was the only scheduled outing for the popular British driver this year. He only managed to take the lead in the last lap after rookie JR Hildebrand crashed into the wall and gave away his four-second lead.

“With a Cinderella story we took on the might of Roger Penske’s organization and Chip Ganassi, so now when I’m on the beach with my wife and two kids next week, we can be proud of what we’ve achieved together,” Wheldon said after his second Indianapolis 500 win.

At first, Wheldon was concerned about the health of his competitor. However, that fear turned to happiness when Hildebrand confirmed that he was fine.

“As soon as I knew it wasn’t serious, there was a little smile on my face,” Wheldon said. “From that point, it was just making sure I didn’t do anything silly.”

“I think my contract expires at midnight so I just knew when I started this race that I wanted to do everything in my power to deliver a win for not just myself — because I didn’t feel we had anything to prove — but for such a great group of people.”

You know what this means: An all-new William Rast wardrobe for Dan Wheldon!