Despite just announcing her engagement, the brother of Kim Kardashian will not be walking down the aisle any time soon. 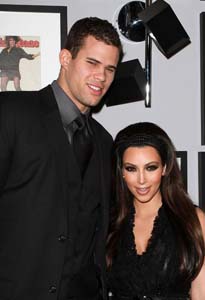 Forget the $2 million engagement ring Kim Kardashian is sporting. According to her brother Rob Kardashian, our favorite little reality gal won’t be walking down the aisle.

Why not? Rob basically said she’s a ho fo’ sho.’

“I just don’t feel confident because Kim has always been so like, you know, she’s, how old?” Rob said during a radio interview with Kidd Kraddick and Hyla on the Hollywood 5.

“She’s just been through a lot of relationships and she always gets hurt or never finds the right dude, but Kris is a really good dude.”

Pretty harsh from your own brother, especially just a day after Kim announced her engagement.

But on the off chance it does actually happen, Rob is pretty sure they might actually make it.

“They’ve had their own personal, private relationship a long time now and I feel like they are a really good match for each other,” he said.

Yes, six months is a really long time in Hollywood. They go by dog years there.

Tell us: Do you think Kim Kardashian & Kris Humphries will make it down the aisle?