Jane Seymour must have gotten a heck of a call from someone’s lawyer — the actress went on The View to apologize for saying she thinks Arnold Schwarzenegger has more secret kids. 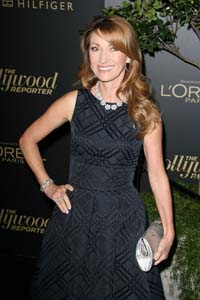 Remember how actress Jane Seymour said Arnold Schwarzenegger has two other secret kids, at least, and that tons of other mistresses will come crawling out of the woodwork soon? It seems she’s sorry about that. Perhaps she got a call from somebody’s lawyer?

Seymour went on The View to discuss her verbal diarrhea.

“I am so beyond sorry and appalled that I found myself even talking on the subject at all. I do not know anything about any love children,” Seymour said. “Anything that I said was stupidly listening to some stuff in the media that day. Everyone was talking, I don’t even know where I heard it and I don’t know anything about anything.

“The way it got all put together is beyond embarrassing and I just feel so, so badly for Maria and the children because I’ve been through similar kind of stuff. I just hope that they’ll accept my apology and realize that I do not want [to] in any way exacerbate the pain that that family’s going through.

“You have to understand, I didn’t go out to have this conversation, I was, it was the premiere of my movie, which had a very similar theme and that’s why they asked me about it.”

Seymour has been married four times and divorced three, so chances are the “similar kind of stuff” she has been through include one of those spouses cheating.