Actor Jeff Conaway is dead a week after being found unconscious in his home. He was 60 years old. 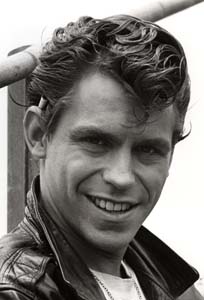 Grease star Jeff Conaway died this morning after being taken off life support at the request of his family. The 60-year-old actor was found unconscious in his apartment by a friend last week and was suffering from severe pneumonia and sepsis, believed to have been exacerbated by his decades-long drug use.

Conaway followed up his stage and movie success with a role in the hit sitcom Taxi, playing out-of-work actor Bobby Wheeler from 1978 to 1981 and earning himself a Golden Globe nomination. Taxi writer Sam Simon told Howard Stern that during production of one episode, Conaway was found in his dressing room too high to perform — his lines were instead divvied out to costars Danny DeVito and Christopher Lloyd.

Conaway later appeared on Murder, She Wrote, The Bold and the Beautiful and Babylon 5 as well as in the films Jawbreaker, Pete’s Dragon and Do You Wanna Know a Secret?

The actor first went to rehab in the mid-1980s, but relapsed by the mid-2000s. After being forced off of Celebrity Fit Club because of his addictions he joined Celebrity Rehab with Dr. Drew — where he quickly became the main attraction of the series. Showing up to the rehab facility nearly incomprehensible, he told Dr. Drew Pinsky he had binged on cocaine and Jack Daniel’s the night before. Conaway later said he wanted to kill himself.

However, it is not believed that the condition leading to his death was a suicide attempt. “I have heard those reports, but I would be highly surprised,” said his manager Kathryn Boole. “He is not the sort of person who would intentionally take his own life.”

Conaway was married to Rona Newton-John, the sister of his Grease costar Olivia Newton-John from 1980-1985. He wed Keri Conaway in 1990 and while the couple never officially divorced, they have long been estranged. He had no children. His longtime on-again, off-again girlfriend Vikki Lizzi attempted to prevent his family from removing him from life support to no avail.