Grease actor Jeff Conaway has died after a long struggle with addiction — and his celebrity friends and fans alike are devastated by the news. 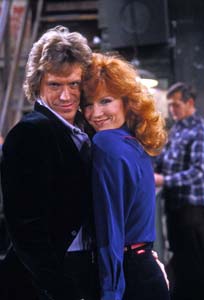 Jeff Conaway’s death has devastated his close celebrity friends and fans, many of whom are speaking out on the troubled actor’s tragic demise.

Former wife Rona Newton-John, sister of Conaway’s Grease co-star Olivia Newton-John, had been with him since he was brought to the hospital after being found unconscious in his home.

“I was not there today… but I’ve been there for the last two weeks. The whole thing is very sad,” Rona told RadarOnline.

“I know that down the road the family might do some kind of memorial. He’s probably in a better place.”

Longtime friend John Travolta, who starred with Conaway in Grease both on Broadway and in the movie, once tried to help the troubled actor beat his addictions through Scientology. Travolta said his costar was a “wonderful and decent man and we will miss him.”

“My heartfelt thoughts are with his family and loved ones at this very difficult time.”

Taxi costar Marilu Henner is heartbroken over the news. She told RadarOnline, “I can’t believe he has gone… I really thought he was going to pull through.”

“When I saw him in hospital just a few days ago he looked so handsome — the best he has been in several years — and there were signs he knew we were present, too.”

“I feel like I have lost a brother. Jeff and I were very close and we always made a point of contacting one another during the holidays,” Henner said.

“My two sons feel like they have lost an uncle and even through all his struggles Jeff could always smile and make others laugh too — I will really miss him.”

The husband of actress Didi Conn — another of Conaway’s Grease costars — said, “Didi is upset and devastated by Jeff’s passing. He will be missed. She cannot even talk on the phone right now.”

Conaway was found unconscious in his apartment on May 11 by his girlfriend Vikki Lizzi, suffering from pneumonia and sepsis exacerbated by years of prescription drug abuse. Despite attempts by Vikki Lizzi to prevent his family from removing the actor from life support, Conaway died this morning at 60 years old.