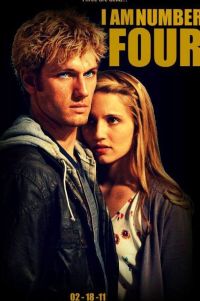 The movies currently winning the DVD rental battle are recent releases The Mechanic, No Strings Attached, The Roommate, The Green Hornet, Gulliver’s Travels, Little Fockers, Justin Bieber: Never Say Never, Harry Potter and the Deathly Hallows: Part 1, Black Swan and The Chronicles of Narnia: The Voyage of the Dawn Treader, in that order.

I Am Number Four stars Alex Pettyfer as John Smith, an extraordinary teen in hiding. A deadly enemy has already taken out the first three and “John” may be next. In the meantime, under the watchful eye of his protector (Timothy Olyphant), the young man comes into his own and finds love (Dianna Agron).

Other new releases hoping to make a dent on the rental top ten include Antonio Banderas’ mystery thriller The Big Bang, Zoe Saldana’s dramedy Burning Palms, the horror romance Forget Me Not and crime comedy The Scenesters.

Old school films hitting DVD/Blu-ray include Charles Chaplin’s The Great Dictator, 1971’s Le Mans and The Boyfriend, 1966’s Grand Prix and 1986’s Platoon, along with director’s cuts of the more recent Gettysburg and Gods and Generals.

Two documentaries also landed in time for Memorial weekend. The French orangutan tale Nénette invites viewers into the life of the 40-year-old star of the Paris zoo, along with her orangutan friends. Martin Scorsese’s Public Speaking is all about writer Fran Lebowitz and her unique world view. It features archival footage of Thelonious Monk, Toni Morrison, James Baldwin, William F. Buckley and Truman Capote.

If you enjoy your comedy out of the box, pick up The Kids in the Hall: Death Comes to Town. Real life kids, however, might be more interested in Bridgit Mendler’s Lemonade Mouth.

On May 31, look for True Blood: The Complete Third Season, Drive Angry and Biutiful.

Also, in theaters this weekend: