If those walls could talk! Charlie Sheen is selling his Beverly Hills mansion, dubbed Sober Valley Ranch, for $7.2 million.

The warlock Charlie Sheen is selling his famous Sober Valley Ranch mansion, nicknamed after he reportedly got sober at his mansion, originally named Silver Valley Ranch. 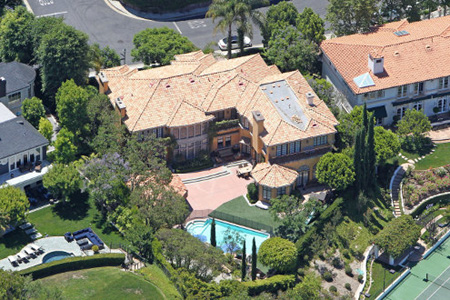 The house is 7,924 square feet and has five bedrooms and seven baths. “This custom-built Mediterranean in Mulholland Estates is an entertainer’s dream with spacious public rooms, most of which open to a beautifully landscaped yard featuring a professional outdoor kitchen with dining area, pool and spa,” the listing for the house says. “Other features include a screening room and top-of-the-line appliances and finishes.”

Why is Sheen selling his mansion? Once the highest-paid actor on TV, earning $1.25 million per episode of Two and a Half Men, could the unemployed actor be hurting for money?

TMZ is reporting that Sheen did borrow $10 million from Warner Bros, which he paid back through deductions from his paycheck. He also has child support he is paying to both Denise Richards and Brooke Mueller.

Where will Sheen and his one goddess move to? No word yet on where he will take his traveling party.