Tiki Barber made a totally uncool comparison between himself and Anne Frank. You’re not going to believe what he said. 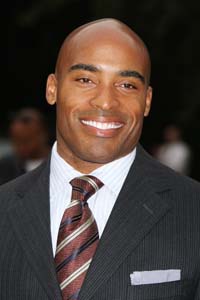 Everyone knows that guy — the one who just says what’s on his mind before thinking how insensitive or just plain stupid the comment is. Add former NFL star Tiki Barber to that list.

Barber was doing an interview with Sports Illustrated about his attempt to get back into professional football when he was asked about the media scrutiny around the time he left his pregnant wife for a 23-year-old NBC intern. He said that he spent time hiding out in his lawyer’s attic.

“Lep’s Jewish,” Barber said, referring to his lawyer, Mark Lepselter. “And it was like a reverse Anne Frank thing.”

Yes — he actually said that.

“In a world where nothing surprises me, where things get completely blown out of proportion, this only adds to the list. [Tiki] was shedding light on going back to that time when he was literally trapped, so to speak, in my attic for a week. Nothing more, nothing less,” Lepselter said when word got out.

Oh, and then he pulled out the typical response when someone insults a large group of people.

“Let me remind all those who want to make this more than it is: Tiki was a guest of [president] Shimon Peres in Israel five years ago.”

Basically, it’s like Lepselter is accepting his comments because he, like, “totally has a ton of Jewish friends.”

The director of the National Defamation League is calling out Barber for his comments.

“Holocaust trivialization continues to spread and finds new ways and expressions that shock the conscience,” Abraham H. Foxman, ADL national director and a Holocaust survivor, said in a statement. “Tiki Barber’s personal behavior is his business. But our history and experiences are ours and deserve greater respect than being abused or perverted by Tiki Barber.”

“The analogy to Anne Frank is not funny, it is outrageous and perverse. Anne Frank was not hiding voluntarily. Before she perished at age 15 in the Bergen-Belsen concentration camp, she hid from the Nazis for more than two years, fearing every day for her life. The Frank family’s experiences, as recorded in Anne’s dairy, are a unique testimonial to the horrors of the Holocaust, and her life should never be debased or degraded by insensitive and offensive analogies.”

What do you think: Was Tiki Barber offensive or are people just too sensitive?